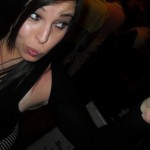 where to buy disulfiram in uk Liverpool, November 25, 2009 – The much anticipated Wiiware™ title, Monsteca Corral will soon make its gaming debut this coming January 2010 after almost 18 months of development. The British indie game developer Onteca, only recently announced the launch of their first game this month which sparked off debates as to whether or not an indie company could bet all the odds and become another ‘World of Goo’ story.

Frankfurt am Main The casual game that could only best be categorised as being in the same genre as Pikmin and Flower, has fought the immediate comparisons made when such prominent titles were mentioned. The developers at Onteca have taken everything with a pinch of salt, and are confident that once players delve into the surreal ambient levels of Monsteca Corral that previous misconceptions will be amiss.

Monsteca Corral is an independently developed title focusing on fast paced fun-puzzle gameplay, targeted at anyone and everyone who enjoys pick up and play games with no hidden agenda to subliminally take over their life. You play on your terms and you the player control a herd of peculiar named orange creators, formally known as Sdompes’. The cute and not so bright Monsters, who once activated, need help to avoid being dismembered by invading robots. So instead of watching the poor creators run dim-witted riot, it is your job to accumulate and guide them successfully through each level.

You take the role of a Monster Herder, flying above them and saving them from the dangers of their changing environment and the ever growing ominous robot population. As your Sdompes’ run through each level, you guide them towards ‘Energy orb’ bonuses that are scattered throughout the habitat; these will increase the communal power of the herd.
As Herder, you can:

• Use Wiimote to create deviation paths that block off dangerous routes for Sdompes’.

• Use Wiimote to allow Sdompes’ to follow a route.

• Use Wiimote to allow Sdompes’ to split and form a sub group.

• Use Wiimote to help Sdompes’ damage the robot environment.

• Use Wiimote to make your Sdompes’ jump and shake and sing.

As additional levels arise, the game emerges as a cross-country running game with Sdompe migrating through the different and ever changing environments of the Monsteca World: Stomping through Desert, Open Plains, Wooded Highlands, Forest, Wetlands and City in their bid to make it home safely. 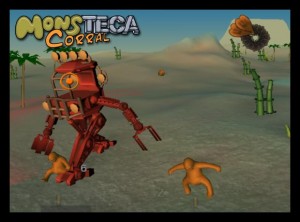 Monsteca Corral is set to be released through the Wii Shop Channel in 2010, venturing into a new family of games for the Wii™ console. Monsteca Corral will invite people to experience a totally new and innovative method of gameplay with a fresh perspective on a classic genre.