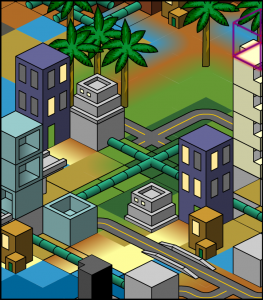 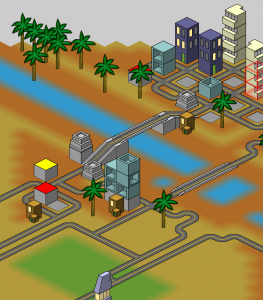 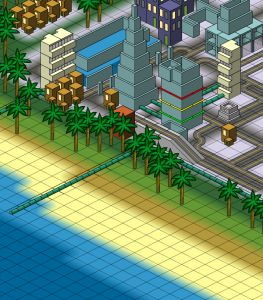 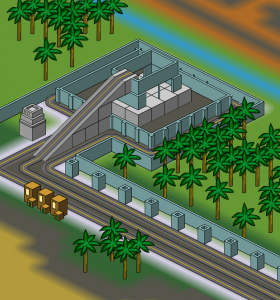 So what’s the game about then i hear you ask.

First things first, Monsteca is more than just a game.
Now this isn’t some marketing speak where I tell you that it’s not just a game, it’s a way of life or some crap (would I do that to you?) no no no,
What I mean is, monsteca is a universe of different ………. things.

There is in the pipeline

Cartoons
A board game
A massive wiki

And more, all taking place in the monsteca universe.

In the beginning there were monsters:

and the monsters lived side by side in general disharmony. Completely
unable to work as a team, the monsters roamed free within their
habitats and occasionally risked being painfully dismembered by other
monster species if they strayed too far from home –
and this was the way of the monsters and so life went on, until a small
and mysterious do-gooding alien life form arrived
who went by the name of:
The Maker
and The Maker (being called The Maker) made. More specifically he made
Robots. He created the first robot ‘chip’ and implanted it into the
first robot Central Processing Unit. The Maker created the robots with
a belief that they would improve the lives of the monsters and provide
some form of order and structure for the world. As with all great
beliefs it went horribly wrong once the Maker showed the robots how
they could make each others units and was hence discarded by them as
they felt he served no purpose.

The Biguana:
Thus the ‘chip’ has been passed from C.P.U to C.P.U and it has become
outdated and damaged causing the robots to behave more erratically.
So The Maker has become increasing weary and fearful of his own
creations. The Maker now lives a solitary existence.
He did however once save a small Biguana monster from the jaws of a
Blind Polar Dog and made him a robot tail to replace his half eaten one
knowing that for Biguanas ‘balance’ is very important to their survival.
The Maker is aware that the robots are not behaving in a responsible way
but fears he can no longer control them.

have now created their own environment in the form of cities and
mines. Robot consumption of world resources and materials is now of
epic proportions.
Collectively the robots view the monsters as a nuisance and have recently
been enslaving them for their own purposes Certain types of robot may be
persuaded to think differently if it is seen to be logical to do so but
.
the present C.P.U (Central Processing Unit) is not exactly logical.

has succeeded in line through the passing of the ‘chip.’ He controlsa
all of the robots but he is gradually experiencing more breakdowns/
crashes, glitches etc. mainly in his logic and understanding
functions.
The present C.P.U is not a nice C.P.U. He proved incompatible with his
compatible unit partner and she left him with a 2nd unit daughter who
he struggles to relate to due to her caring unrobotlike nature.
The Present C.P.U is responsible for the current anti monster regime
which he believes will advance robitilisation. He’s begun to ‘clean
up’ monster populated ‘trouble spots.’

Wii Story
In the world of Monsteca, the Sdompé are undertaking their annual monster
migration from the Southern Desert areas. Normally this is quite straight
forward, with Sdompés running in herds towards the nearest resting Astro
Maggot, symbiotically stirring it into action, then jumping aboard and
taking off to better climes through desert, highlands and open plains
eventually arriving at the Northern Wetlands.
But this year the wicked robots have interfered with their migration by
building cities that are polluting and destroying the monsters’ natural
habitats.
It is up to the Herder, flying overhead on the back of a Manderray, to
help the Sdompé migrate successfully across the robots increasingly
unfriendly and urbanised world.

This Blog documents the development of Onteca’s current project, a game called “Monsteca Corral” for the Nintendo Wii.
A bit of housekeeping first though.

My Name is Phill Hetherington
I’m a 29 year old junior 3d artist on a 3 month work placement here at Onteca.
Being the office junior, I have something of a unique perspective on the new game, since I know almost nothing about programming, not a massive amount about 3d graphics in games. And until recently nothing about the new game, and the world of Monsteca.
The team are 24 months into the development, and so are nearing the end. It’s a shame that I wasn’t here to document the project from start to finish, but I’ll do my level best to get you up to speed. I have to confess, I’m not sure what I’m going to talk about, but I suspect it’ll be a mix of technical stuff, as I learn about it, as well as some of the marketing stuff, and most likely some completely unrelated stuff.
I hope (whoever you are)that you enjoy reading it, and perhaps find it a useful or interesting source of info.
You can get in touch with me via phill@onteca.com or reply here . I’ll be grateful for your feedback, suggestions, insults and what have you.

though may have to re-think detail to optimise performance

or render tiles to bitmaps?

Blogging while the design is changing
jon
0
share Tags

I am having the interesting experience of chucking up a few posts while elsewhere Dan is changing the design, every time i look the world of blogteca changes